EasyRinger now offers more granular control of how you handle forwarding of your calls and messages. Previously, if you didn’t want to forward a call or message, you simply deleted your destination number. But, what if you want to forward calls but not messages? You were out of luck! We now let you control whether you forward your calls or your messages – and you don’t need to ever delete your destination number to take advantage of this.

Many subscribers like to save money by not forwarding their messages. This often will result in free or near free messaging on your EasyRinger number. You can receive your text messages in email or just monitor your SMS history.

To not forward your text messages or your calls, just click/tap on the gear icon next to your number in the EasyRinger dashboard. That will let you configure your EasyRinger number. The first tab you will see is the “Voice Options” tab, the second is the “SMS Options” tab. Use the “Forward SMS messages to my destination” button to turn on or off your forwarding.

Many subscribers have requested that their official information be present on invoices. We have now added this feature. To access it, log in to your EasyRinger dashboard and click/tap on the “Subscription” button. We have added an “Invoice Data” panel where you can enter your name, company name, and address. All fields are optional. Whatever you fill in will be present on all of your invoices.

We have added a new tab to the options interface for your EasyRinger number called: “Notifications”. Here, you can set up how you would like to be notified of special events on your number. We are starting with the simplest: Email.

In the past, all notifications went to your subscription email address. But, many subscribers with multiple numbers wanted to be able to associate a different email address with each number. That’s only natural, especially if each phone number is assigned to a team member, for example.

EasyRinger now offers a super easy way to block unwanted calls. To access these options, click/tap on the little “gear” image next to your number in the EasyRinger dashboard, then select the “Number Blocking” tab.

Number blocking or number allowing is simple. First you need to decide if you want to allow number or block numbers. If you block numbers, select the “Block Numbers” radio button. Then, any number the matches the calling number will be blocked. All other numbers will be allowed. If you want to only allow numbers, select the “Allow Numbers” radio button.

“Allow Numbers” is much more restrictive. For example, if you select “Allow Numbers” then add one number to your list, then only that number can call you. Every other number will be blocked. Use this if you know that only certain numbers should call you and you want to remove any excess calls.

“Block Numbers” is useful if you have some particularly bothersome numbers that won’t stop calling. Simply select “Block Numbers” then add the offending numbers to your list:

To remove a number, simply click on the “trash” icon and the number will be removed. You can have up to 50 blocked or allowed numbers.

You can now choose what caller ID you see when someone calls your EasyRinger phone number.  With caller ID, you have two choices:

“The calling number” is standard caller ID behavior.  When someone calls your EasyRinger number, the call forwards to your destination and you see the number of the person who is calling you.

“Your EasyRinger number” will show you when your EasyRinger number has been dialed.  This way, you can answer your phone in a particular way.  For example, if you’re starting a small business or running a test market, you probably want to choose this option.

For callbacks (where you use EasyRinger to call out), the person being called will either see your destination number (if you’ve selected “The calling number”) or your EasyRinger number.

Posted in News, Tips
EasyRinger now lets you customize your voicemail to your liking.  You can even use text to change the message that your callers will hear.  EasyRinger uses an evolved text-to-speech engine that provides the most natural sounding response available.  Here’s a summary of the features that are available: 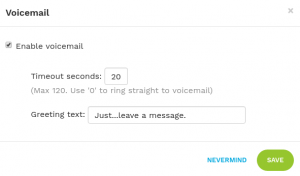 How to Send an SMS Message

Posted in Tips
You can now send SMS messages with EasyRinger.  First, log in to your subscription.  In the “Actions” to the right of your EasyRinger number, you’ll see a “Send SMS” button if your number supports SMS (older numbers do not support SMS).  Click on the “Send SMS” button and you’ll see the usual country select and phone number boxes.  Underneath that, you’ll see the box where you can type your message body.

When you click “Send” you’ll see a reminder message to let you know that your message will be queued immediately.

Not long after that (usually just a few seconds), the SMS should appear in your SMS history.

If you’ve had problems with the callback feature of the iPhone app, check this out.  The symptoms of the problem:  You try to either update your destination or make a call, but when you submit your request by pressing a button the wait cursor just spins and spins forever.  Or, as some users have reported, when they log in, their password fills in automatically – a wrong password.  Try this solution as well.

We’ll have this fixed in the next version of the app, but here’s how you can deal with this now:

We’ve heard some complaints about not being able to use the functionality of the Android application.  The symptoms:  You try to either update your destination or make a call, but when you submit your request by pressing a button, you get just an empty little box that appears for a while and then goes away.

We’ll have this fixed in the next version of the app, but here’s how you can deal with this now:

Clearing the app’s data will require you to log on again, which will establish a new authentication token and allow you to use the app.

For the next version, we’ll also give you a way to log off.  That’s a popular request.

Security Tip:  On another note, check out the second arrow at the bottom of the screen.  This is where you’ll see the app’s “Permissions” or what the CallMeInChina app is requesting that it be allowed to do.  As you can see, we require the minimum set of permissions:

Be careful of other applications that are requesting more permissions than they need.  Android is generally not as safe an operating system as Apple’s iOS, so you have to pay a little more attention.  You could download an application that is actually trying to do something malicious.  The permissions help you manage this.  If you see that an app is requesting very little permissions, or just enough permissions to accomplish it’s mission, then you can likely place more trust in it.  Watch out for apps that ask for all sorts of permissions that seem to be unrelated to the app’s purpose.  When in doubt, do some online research, ask around, and try to determine the reputation of the app.

How to use “Make a Call”

Can you explain how to use “Make a Call”?

Sure thing.  Just tap on “Make a Call” to arrive at the Callback Screen. Here, you can type in the number that you want to call or you can tap the “Contacts” button to choose a contact.

Once you are ready, type “Call”. You should eventually see a message pop up telling you to expect a call!

I’m trying to make a call.  Why should I expect a call?

Well, that’s why we call them “callbacks” – you are being called back by the Call Me in China service.

To avoid expensive international fees, the Call Me in China service calls you first. Then, when you answer, the service will connect you to the number that you want to call. It usually takes anywhere from 2-5 seconds for your phone to start ringing. Once it does, you’re on your way to talking with your friends, family, and customers back home.

Fees for calling back are not the same as calling to China or Hong Kong.  They are also subject to competitive rates in your local country.  Please check our FAQ for rate information where you can even check for the rates for specific numbers.

Where do I get the app?

Just go to the Google Play Store and search for “Call Me in China”.  If you are having internet blocking problems in China, then try downloading the app directly from the Call Me in China homepage (click on the “Mobile” link at the bottom).  Be sure that your Security settings allow you to download and install non-Market apps (go to Settings -> Security and search for “Unknown Sources”).